Songas is pleased to announce the appointment of Anael Samuel as the new Managing Director of the company with immediate effect.  The Tanzanian national takes over from Nigel Whittaker who was recently appointed as the company’s board Chairperson.

Under his new role, Anael will lead the company to continue its excellent operational performance and availability and continue to work on its plans to invest over USD65 million (approximately TZS126 billion) to expand its generation capacity at the Songas Ubungo Power Plant from the current 180 MW to 245MW.

Anael joined Songas in April 2014 as Chief Financial Officer responsible for managing all financial planning, reporting and management of risk for the company. Prior to joining Songas, he held senior roles at Intra Energy Tanzania Limited, Tanga Cement and Unilever. Anael holds an MBA qualification from the University of Dar es Salaam. He is a Certified Public Accountant of Tanzania, Certified Information System Auditor and also holds a Bachelor’s Degree in Computer Science and Mathematics from the University of Dar es Salaam.

Commenting on the appointment, Songas Board Chairperson, Nigel Whittaker said: “As a long-term partner to Tanzania, Songas is committed to developing local talent by ensuring more Tanzanians assume leadership positions within the company and industry at large. Anael’s expertise, demonstrated leadership skills and years of experience with the company makes him a perfect candidate for the top job. He will provide seamless leadership to position Songas in playing an increased role to meet Tanzania’s current and future energy demand and support the country’s industrialisation.”

Speaking on his new position, Anael said: “I look forward to progressing discussions regarding the company’s expansion plans which will add 65MW to Songas capacity and the national grid. Songas will continue to support the Tanzanian Government to meet the anticipated power demand created by sustained economic growth.” 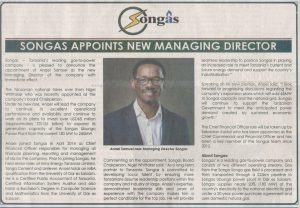